by setting up a mysql-db (on Scientific Linux 6.1 I run into trouble cause I’ve changed the data-dir to somewhat outside of /var/lib/mysql… and it won’t work, got errorcode 13 – permission denied. chowned, start – failed. checked permissions twice… but the net has the solution (spreaded over some pages) on some „modern“ linux systems SElinux secures anything. more or less usefull. simply setup the tables and change the SElinux security context of the new data dir to that of the former data dir. and (if needed/configured) don’t forget to create the inno-db-dir manually… sample for data-dir is /data/db/mysql with innoDB at /data/db/mysql/innodb:

collected: get linux version and flavor

I need this seldom – and then I can’t (completely) remember…
so I wrote it down here. The first thing that comes every time back to brain is take a look in /etc/issue:


Not so much information. Not reliable. The second is lsb_release:

Update: Got time to play again with the Chronos and … huuu, fu**. There was a big mistake in the old version – all bits must be  (old+1)%8… its corrected now.

This is a „cheat sheet“ that contains the assignment of the LCD_B memory (0x0a20 to 0x0a2b) and its bits to the wristwatch’s display elements. 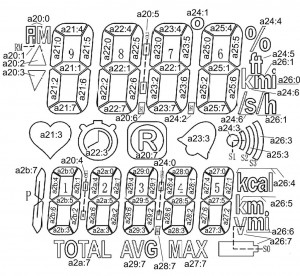 as .pdf
as zipped svg

this is a plain collector article about gnu screen. in the early days I used screen only for running processes that should last after I’ve logged out. now-days it’s comfortable for debugging programs and/or running [virtual] kernels/machines in one terminal. to screen-able your shell simply run screen (>screen). the following snipped gives a short overview about the most common shortcuts you could use in screen…

you can also define your own bindings and beside the already bounded commands there are tons of it you can use in the screen-prompt (have a look to the man’s, most used by me is hardcopy -h

Since testing modules for GRUB by compile/reboot/test/boot/… is time consuming, frustrating – simply not very efficient, there was an utility shipped with the sources called grub-emu that (like the name states) emulates the grub console. But: it was/is not a perfect emulation (stm), no modules are loaded/loadable so every module must be hand-coded-added to the built and… it does not build (like descibed here).

And thats is okay cause there is another great tool: grub_mkrescue – an image builder that creates floppy/cdrom-images with… grub on it. (and it supports the preloading of modules) Sample:


Gives a GRUB inside qemu with hello.mod already loaded. Fine. Put the lines into the Makefile of the module currently developed (maybe as run-target) and testing becomes a lot easier…

Assume you have checked out the (latest) sources of grub2, and now you stay into the source-dir grub-1.98. Your new module (for the firsttime a copy/paste/change of hello/hello.c) goes to grub-1.98/simplemod.

Building a module could be done two ways: the slower one by adding a probate entry in conf/common.mk (simple copy/paste an entry for a given module like hello) – results in building everything again, and again when calling make clean/make… or the good, fast and due to the handcrafted standalone-Makefile ugly one.
No more filling phrases… here is the makefile (to be placed in grub-1.98/simplemod/Makefile):

Okay, on the first time you must create the surrounding grub2-ecosystem (grub-1.98/configure;make;make install). But after that you only need to compile your new module. That is efficient.

Forced by a project@work I had to install GRUB2 in Fedora 14. Here is a simple description of what I have done to got it running:


Attention: at this time, Fedora uses multislot – GRUB Legacy (0.9x) and GRUB2 could be installed parallel.

In the snipped above you could see that GRUB2 is allready inserted into the grub.conf of your old GRUB. You could use it for boot into the GRUB command-line.

2.2. create a new grub.cfg
Important: in GRUB Legacy (the old GRUB) the partition-numbering starts with 0. In GRUB2 the numbering starts with 1. So hd0,0 from above becomes hd0,1 eg.
Check/note on witch device/partition your /boot and root is located and witch UUID it has assigned (mount gives you the device /dev/sd…, blkid the associated UUID), sample:

The output is placed into /boot/grub2/grub.cfg.new – do a cat on it and compare the UUID for /boot and root with the ones from above (and maybe compare against your old grub.conf) … and yes, hd0,0 is now hd0,1 .

4. The final step: install the new GRUB on the disc…
First only test that everything is fine… (without writing to MBR assuming the target drive is /dev/sda):

Now lets use the real bullet:

GRUB2 offers 1000nds new possibilities (ohh, it has a LUA-shell, there is module-support, submenus, theming, …)

…compensate the digital dementia by writing things down.