Suddenly the display of an old Nokia N95 stopped working. On power on the phone vibrated – but nothing more. Sliding the display up and down created some scratchy sounds – a good indication for a broken foil flex cable. According to Murphy’s law this only happens if you haven’t done any backup and you need some of the contacts stored on the phone urgently…

In this situation (according to some reports I found in the net) you try to connect the phone to a (Windows)PC running the Nokia OVI suite – and if you haven’t changed anything related to the phones way on how to connect to a PC – you can press the okay-button on the phone, OVI will detect it and you can sync the data to the PC. But this didn’t work for me – of course :-(.

As it was really urgent to get some of the contacts I decided to fix the display by repairing the broken flex cable. After opening the phone I found two of them – back-on-back – connecting the phone body with the (sliding) display. And happily the one with only 5 traces was broken. I used a scalpel to scratch down to the copper of each side of each trace, applied some flux and soldered some small pieces of (solid) wire on top of the flex cable. 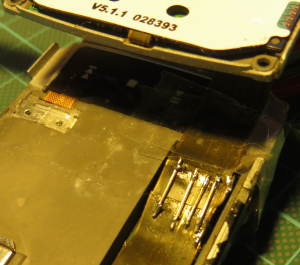 This is definitively the ugliest thing I ever did. But after a half hour of scratching and soldering the display came back to live. 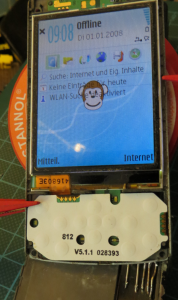 The OVI suite uses sqlite as storage backend. To be able to push the contacts (and messages) from the backup to another platform I wrote two small scripts for reading the sqlite-DB’s and writing the data to stdout (formated using XML).

There are no comments.