By killing the nand off his dockstar a colleague gives me the final trigger to buy a BusPirate – an awesome tool for dealing with several buses and protocols – including JTAG. I found tree great HowTo’s on debricking the dockstar here, here and here.

1. dockstar uses 3.3V-level for the serial communication – so a ftdi232-based serial-ubs-adapter could do the job. But my colleague decides to use some china crap (see image below) with an PL2303 – normally no problem. But two weeks ago I updated my M$-PC to Windows7/64. The driver offered by Prolific (version 1.0.0.0) won’t work anymore for this „brand new OS“. Someone mentioned a a GPS-device that is based on/contains the PL2303. The driver for that GPS contains the driver for the PL2303 with version = 1.2.1.0 and… it works for Win7/64. 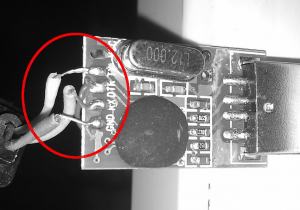 2. BusPirate is advertised with the attribute „also a JTAG-device by using in conjunction with OpenOCD“. But this depends on the version of the firmware of the BusPirate. My unit was delivered with FW 5.10 – won’t work with OpenOCD (I did a fresh build with the GIT-sources and a manual fetched 0.5.0 – booth won’t work). I’d go down step-by-step in FW version till FW5.8 (okay, 2 steps != a long way) and now it works. Sadly I had to disconnect/connect the BusPirate before I could start a new OpenOCD session every time.

below the procedure that works for me…
in the openocd-shell:

now move (fast) to the serial terminal, press <any> key…

Result: DockStar is back to live, and I got a BusPirate.

There are no comments.